I remind you, fiercely, not to assume too much based on appearances: 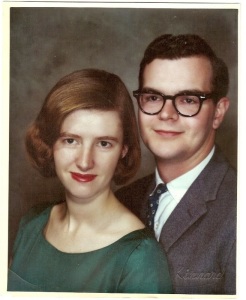 Photograph, 1962. “The 60s” haven’t really begun yet–in the obvious ways. President Kennedy is on a cocktail of drugs, legal and illegal, and has been dropping acid with his brother Bobby.

We were living in Larchmont, had three kids, one on the way. Tim was working for the Conservative Book Club, headed by Neil McCaffery. Danny Rosenthal was the head of the sales department, and he and Neil got into some sort of disagreement, and we wound up siding with Danny, and Tim (and Dan) were fired from the CBC. All of this happened when we were just getting involved with the Discordians.

Tim wrote this hilarious piece about secret societies and goings-on, and when Bill Buckley saw it, he immediately wrote Tim a note that asked if he could have the article for $1000? Tim wrote back “Yes, if I can keep this note.”

So the commercial possibilities were enormous—buttons, notepads, cards, and bumper stickers. We produced them and sold them, and formed Our People’s Underworld. It kept us alive financially until Tim finally got a speech writing job in Indianapolis.

When we moved to Indiana, we had 25 acres of land, and three acres surrounding the house; that is, not under cultivation. Yes, we grew a lot of pot—it kept us afloat through those years. It was an income for us, though it simply horrifies me now to think how reckless we were. I don’t know about the others, but we smoked just for the feel good. No thoughtful insights, no magical apparitions. We smoked with a couple of our conservative friends, but I don’t know about others. My guess is that everybody smoked, but most people didn’t gab about it.

All of these goings-on form the deep background of the book Illuminatus!, which we know that, at a minimum, Foseti and Henry Dampier have read. I don’t think Foseti quite grokked the Inner Church, however.

I went to see Robert Anton Wilson at commie-outpost Reed College in 1990. I expected some kind of Mage-cross between Tim Leary, Socrates and Gandalf. Instead, he talked like a bitter old man, royally pissed off at Reagan-Bush and conservatives. He seemed to have forgotten all the cool detachment he should have learned from Leary and the relaxation that comes from smoking thousands of joints.

I remind you, fiercely, not to assume too much based on appearances. 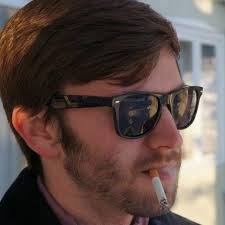 Something is rising, something big, out of the depths it rises, but it will not look exactly like anything any of us expect. In the age of pixels as person, reflect intensely not upon the iceberg, Grasshopper, but upon the fate of Caine.