A couple of years back I wrote a piece at The Mitrailleuse, Opus Dei Could School the Neoreaction, of which the eminent Nick. B. Steves wrote, “He gets very much very right.”  High praise.

Recently I read Anti-Puritan’s post Scientology, training routines, and the post-rationalization of abuse and it occurred to me that Scientology also might “school” the NRx and that my personal knowledge-set made me the man to write about it. As I commented:

I have a good deal of knowledge of Scientology, and a somewhat different take on the results of these exercises. Enough to finally do a new post on my own blog, which will appear in a day or two.

As that was approximately 26 days ago, let’s just say that I was pondering all this time about the right approach.

Unlike the Anti-Puritan I wasn’t raised in Scientology and I’m sure he has some different, deeper insights based on that, but what I do have is a thorough historical understanding of the roots, of where Ron Hubbard was coming from and from whence came some of the ideas, practices and “tech” that began as a book, Dianetics, and morphed into a religion based on copyright fights, bankruptcy law and the United States tax code; all of which is utterly fascinating and about which I could entertainingly write for a few thousand more words. Maybe I will do that later. For now, on to “Training Routines”:

In Scientology there is this thing called Training Routines, or TRs for short. It is like meditation but not. In the first training routine, (TR Zero), a person is trained to sit still with their eyes closed. They are not allowed to fidget, sneeze, giggle, laugh, scratch themselves, shift their weight around a lot, fart, or fall asleep. They have to sit quietly for hours on end without any nervous behaviors or falling asleep. It they so much as giggle, the whole exercise starts over again. This goes on and on and on day after day. If you fidget in any way the coach yells “flunk!” and you have to start over again.

The point is NOT to suppress your emotions. The point is to learn to be there comfortably.

After you have mastered TR-0 you move on to TR-1. TR-1 is the same thing, but with your eyes open. You sit there in a chair with your feet on the floor and LOOK at another person for hours on end. You are not allowed to fidget, squirm, giggle, laugh, or anything. It you do any of these things the “coach” yells “flunk!” and you have to start over. If you flunk too many time you have to go back and repeat the previous level.

And so on. Those with the requisite historical knowledge will recognize that almost none of this is in any way original. Buddhist monks do something like it (not everything they do is “meditation,” you know), heck, have a look at these “12 Concentration Exercises from 1918” posted at The Art of Manliness. 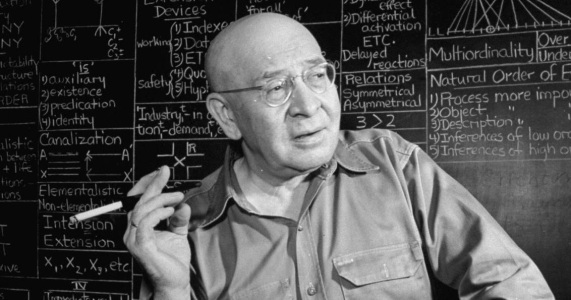 A major and direct influence here, I would argue, is Korzybski and General Semantics (“silence on the objective levels”). A related, and very important, Scientology exercise involves finding words and phrases that “trigger” a person by reading lists and seeing what causes a jump in “E-meter” (galvanic skin response) readings. The trainer then focuses in on repeating these words and through the “biofeedback” of the GSR meter the person learns to dampen and extinguish the emotional response to the trigger. Eventually, the well-trained Scientologist is expected to sit in a chair while a team of people screams “Your mother was a no-good whore!” or other such phrases, and to show no response to it all.

The Anti-Puritan believes that this is a sort of submission training:

Whether L. Ron Hubbard knew this is what he was doing when he came up with TRs is anyone’s guess. But the inevitable result of TRs is a population of people who take abuse passively without resistance, and a managerial culture where people with power relentlessly dehumanize their subordinates. Whether intended or not, the consequence of TRs is to eliminate the fight-or-flight response, and create a cycle of post-rationalization of abuse and dehumanization. This is exactly what we see in Scientology. The ruled passively accept the abuse of the rulers.

I will make a different argument here: These exercises are closely related a concept put forth by General Semantics, and popularized by the science fiction author A. E. van Vogt: The cortico-thalamic pause.

In his Null-A series of novels van Vogt explores this technique as a way for man to become more sane, something of obvious interest here, given the title of this blog. In brief, the Pause is a trained, conscious, willed delay of the reaction that inevitably follows insult or aggression. It is deliberate control of fight or flight, not (ideally) an elimination. It is not new, but is certainly rare enough to be notable. As Murat is supposed to have said of Talleyrand:

“One could kick him in the behind and not a muscle of his face would move until he had decided what to do.”

Hubbard was quite familiar with van Vogt’s work, from the science fiction world and from personal acquaintance and discussion after 1945. Van Vogt even became the head of Dianetics’ California branch briefly in the early 1950s. Hubbard had surely known of Korzybski long before, through his association and discussions with Robert A. Heinlein, if nothing else.

My considered view is that the techniques referred to in Scientology as the “TRs” are quite useful in the quest to run one’s own brain as opposed to being buffeted about by chance, fortune and silly attacks from SJWs on the internet. What Neoreactionaries need to cultivate is detachment. It is indifference to the grunts and other noises involved in mammalian politics. Or, as @Outsidedness states in his Twitter bio:

Coldness be my God.

Steves noted in the comments to the post we’re here expanding on:

And yet… Scientology. A high-agency, high-status cult with a successful track record against The Cathedral. Hormesis??

Ah yes. Scientology, in essence, defeated the IRS. Is it an evil mind-controlling abusive secretive cult-like regime dedicated to amassing $$$ for its top level? Perhaps. Does that mean the NRx couldn’t take out a lot of valuable, useful and even, ahem, occult information from it?

6 thoughts on “How Scientology Could School the Neoreaction”